Thank you for submitting your project.

To submit your project, please complete and sign the project submission form (download here). Simply send us the form, along with your project, at the following address: 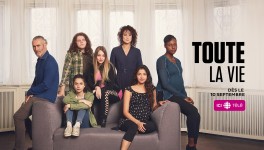 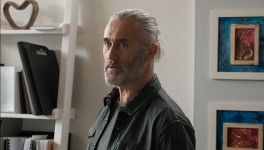 Back to the productions

MY BODY AND THEM revolves around a very unique institution in the world: the Marie-Labrecque School. It welcomes pregnant or young mothers aged 12 to 17. It has the double duty of tending to their education and preparing them for their role of mother. The teenagers will need to prove that they will be able to take care of the fragile and totally dependent little being they are welcoming in this world. Nothing is less sure! It’s a colossal challenge and they only have a few months to achieve it.

Like the sixty girls who attend the school, Edwidge, Flora, Den, Camille and Jolene are firmly committed to continue their studies; while Anais, 13, is eager to be admitted, but she will have to convince her parents first... These girls enter abruptly into the adult world, while still struggling with the problems youngsters face today: low self-esteem, family conflict, hyper sexualization, eating disorder, anxiety, abandonment, etc. The ambition is there, but the reality is demanding, and nothing guarantees they will obtain their baby’s custody after the birth.

The team at Marie-Labrecque consists of dedicated counsellors including Christophe, the new Psycho-Educator and their Director Tina. They support the students to perform in their studies and straighten their lives to prove they will be good mothers. These caregivers will often make the difference, but it won’t always be the case. They will also be helpless witnesses of unattainable dreams or uncontrollable life circumstances.

Anaïs is not even 14 years old when she discovers that she is pregnant after her first sexual intercourse. She is determined to continue her pregnancy, but her parents, the father of the child and his parents do not share her opinion. All agree on one thing: Anaïs is definitely too young to become a mother.

Edwidge has been living with her aunt and brother since both of her parents died in obscure circumstances. She realized too late that she was pregnant, and an abortion was no longer possible. Edwidge faces a lot of responsibilities considering her young age.

Flora, just 17 years old, is pregnant at the same age her mother was when she had her. The decision to continue her pregnancy and get married to David-Étienne was very obvious to her. She is preparing for two great days: the birth of her son and her wedding.

Den arrived following a report from her former high school to Social Services. Her social worker doesn’t want her to follow in her parents’ footsteps and depend on welfare. The goal with Den is to break her social dependency, to educate her so that she can support herself and her child’s future needs.

Jolène is at the top of the class, but her sexual behavior towards teachers and other male students threw her out of her private college. Her parents considered that Marie-Labrecque, an all-girls school, was the best place for her to finish her high school studies.

Parenting is perhaps the hardest job in the world. To assume these responsibilities prematurely requires not only love, but a good dose of resilience and probably a bit of luck. Will Edwidge, Anais, Flora, Den, Camille and Jolene succeed at the end of a journey filled with emotions?